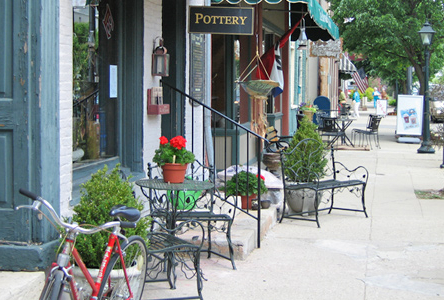 Historic downtown Tipp City is a magnet for shoppers

Known for its charming historical district which bursts with architectural heritage, the Tipp City of today is an almost perfect example of the small town.   The majority of the Main Street shops and businesses are housed in many original structures from the past, lending a historic atmosphere. Unique specialty shops offering an eclectic assortment of treasures including oriental rugs – clothing – pottery – art galleries – and furniture – are set alongside restaurants, coffee houses and professional offices, making it a magnet for shoppers.   The Hotel Gallery, which was originally a hotel in the 1850s, is now home to a wide assortment of shops with handmade pottery, antiques, collectibles and crafts.   Over 90 of the historic buildings in this quaint downtown are listed on the National Register of Historic Places, with examples of many architectural styles.

Originally named “Tippecanoe”, deriving the name from William Henry Harrison’s presidential campaign slogan “Tippecanoe and Tyler, too”, it was founded in 1840 on the banks of the thriving Miami-Erie canal to take advantage of canal traffic.   In evidence of this, Tipp Roller Mill, situated at Lock #15 on the canal, was built in 1839 to manufacture flours.   It is now the home of a theater with musical performances every Saturday.   Later, the citizens unofficially added the word “city” to the town name, and in 1938 the name was legally shortened to Tipp City. Harrison’s Restaurant stands as yet another reminder of the influence of Mr. Harrison on this community.   The Tipp City Mum Festival, which began in 1958, is held in September each year.